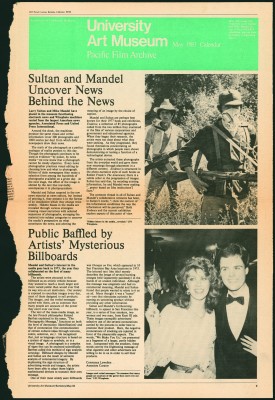 The New Yorker: How Larry Sultan Made His Father a Metaphor for Dashed American Dreams: April 7, 2019

W Magazine: 18 Photographers’ Portraits of Their Moms, From Loving to Unapologetic: Stephanie Eckardt and Michael Beckert, May 13, 2018

The Guardian: Pictures from Home by Larry Sultan Review – When Mom and Dad Lived the Dream: Sean O’Hagan, May 2, 2017

STUDY HALL is a series of public lectures, events & readings. Curriculum relating to the life and work of Larry Sultan, led by artist Lindsey White, and independent curator Jordan Stein, will lead up to, and in conjunction with the retrospective Larry Sultan | Here and Home, April 15 – July 23, 2017 at SFMOMA.

The Wall Street Journal: A Study of Suburbia: January 7, 2015

Time: The Influence and Legacy of Larry Sultan: November 11, 2014