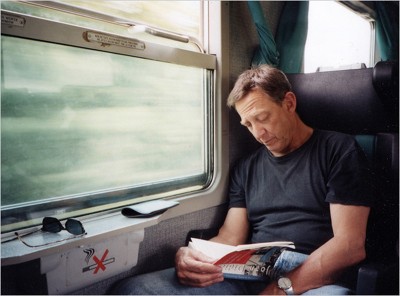 Larry Sultan grew up in California’s San Fernando Valley, which became a source of inspiration for a number of his projects. His work blends documentary and staged photography to create images of the psychological as well as physical landscape of suburban family life.   Sultan’s pioneering book and exhibition Pictures From Home (1992) was a decade long project that features his own mother and father as its primary subjects, exploring photography’s role in creating familial mythologies. Using this same suburban setting, his book, The Valley (2004) examined the adult film industry and the area’s middle-class tract homes that serve as pornographic film sets. Katherine Avenue, (2010) the exhibition and book, explored Sultan’s three main series, Pictures From Home, The Valley, and Homeland along side each other to further examine how Sultan’s images negotiate between reality and fantasy, domesticity and desire, as the mundane qualities of the domestic surroundings become loaded cultural symbols.  In 2012, the monograph, Larry Sultan and Mike Mandel was published to examine in depth the thirty plus year collaboration between these artists as they tackled numerous conceptual projects together that includes  Billboards, How to Read Music In One Evening, Newsroom, and the seminal photography book Evidence, a collection of found institutional photographs, first published in 1977.

Larry Sultan’s work has been exhibited and published widely and is included in the collections of the Los Angeles County Museum of Art, the Art Institute of Chicago, the National Gallery, the Museum of Modern Art, the Whitney Museum of American Art, Tate, the Centre Georges Pompidou, the Solomon Guggenheim Museum, and the San Francisco Museum of Modern Art, where he was also recognized with the Bay Area Treasure Award in 2005.  Sultan served as a Distinguished Professor of Photography at California College of the Arts in San Francisco.  Born in Brooklyn, New York in 1946, Larry Sultan passed away at his home in Greenbrae, California in 2009.